Studio  B Gallery artist, Qiang Huang, was featured in a Talbot Spy article today. See the full article below:

What would it take for an optical engineer, with a Ph.D. in physics, to quit his successful job and take up a totally unrelated field that he wasn’t sure could support his family? Passion. In this case, a passion for creating art. That’s the background story of Dr. Qiang Huang (pronounced Chong Wong). Born and raised in Beijing, China, Dr. Huang currently lives in Austin, Texas, but his work is everywhere there is an art gallery or a computer. That’s because another one of his significant accomplishment might be some modern marketing to complement his traditional still-life painting style.

“Impresion of Time” by Qiang Huang

To hear him tell it, it began after he had moved to the US to study, after graduate school, after joining a startup company, after marriage, after a child, and after getting his citizenship. All the while pursuing a ‘hobby of drawing with charcoal or pencil for fun,’ when he had time after his demanding job. The real motivation came once he bought his first house and wanted to decorate it with some artwork. It was 1998. Says Huang, “I went to places like Michaels and Hobby Lobby, trying to buy some prints, but after so many years of dabbling in art, I was sensitive to colors and style and couldn’t find artwork I really liked. I went to galleries, museums and saw beautiful original fine art, but noticed that it was beyond my affordability.” He thought: Why not paint something?

Realizing he needed more formal art training, Huang took adult education courses from the University of Texas. He also attended various workshops and classes, some of them hundreds of miles away. In the process, he was able to decorate his home, while also accumulating a large inventory of his paintings.

It was in 2007 when there was a shift in his thinking that would change his life. During a Plein Air Austin event, he attended a still life demonstration by a friend of his from Oregon, Carol Marine. Marine, an acknowledged painter and author, introduced Daily Painting, an approach she had recently taken up herself. It involved painting small (5×7, 6×6, etc.), colorful, and realistic pictures every day and then selling them online. Web commerce for artists was a new concept then. At that time, Huang believed that to sell his work he would need gallery representation. Marine changed that. It’s exciting, she told him, and not difficult to do. You put an image of your painting on something called a ‘blog,’ talk about your picture, and link it to an eBay account. People who follow your blog and are interested in your work can buy it immediately without leaving their home.

This new self-representation and self-marketing philosophy was a revelation. With Marine’s help, he opened the accounts, learned how to do some basic marketing, and began to collaborate with other bloggers. He also painted 2-3 hours at night after work, blogging about the painting’s inspiration and process. Within three months, he sold his first painting to someone who was not a family or friend. 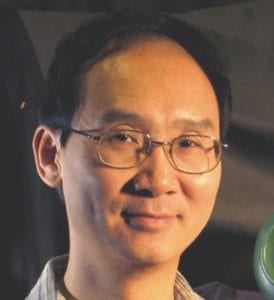 As Huang’s confidence grew, so did sales. Yet, he was still working full time as an engineer in charge of an R&D department, while also continuing to study and paint daily. It was during this time that he visited a gallery and, much to his surprise, saw one of his paintings for sale for double the price he usually charged. The gallery owner informed him that a collector, who had bought a couple of Huang’s pictures online, was reselling it to make a profit.

This experience began a new phase for Huang. Art galleries asked to represent him. His collector base and number of blog followers grew, and he caught the attention of a workshop organizer from Houston who helped plan a class for Huang to teach.

Despite all the training he had done throughout the years, Huang had never taught before, but was willing to share his experience as a daily painter. “I really prepared,” he said. “English is my second language, so I needed to make sure my teaching was understandable. I did the demonstration, told them how I did this daily painting. Spent the afternoon talking about the business activities, how to use the internet and blog and all of that.” The workshop, he said, was a success. People liked his work and bought some of his painting. He also got additional opportunities to conduct more workshops which led to American Artist Magazine writing a featured article about him.

Huang says of that time: “I started to consider… This could be interesting. My art was taking off, the business was doing well, and I was teaching. More galleries wanted to represent me, which started generating some income. Also, more magazine articles about me came out. So, this venture looked like it was growing. My small business became bigger and bigger. I joined professional art groups, such as the Oil Painters of America and was able to show my work and participate in national shows.”

Huang now found himself in the enviable position of being too busy. He was juggling two careers, each wanting his full attention. “If I’m doing something, I want to do it well,” he said. “If I’m doing two things and both are energy-demanding, I only can be mediocre in both. If I want to do well, I need to be able to concentrate. I only have a certain amount of energy. That started cooking in my mind. I needed to consider taking a break from my technical career and go into art.” Despite this contemplation, it would be another three years (and the blessing of his family) before Huang quit engineering in 2011 to became a full-time artist.

Today, Huang continues to paint daily, is represented by even more galleries, including Studio B Art Gallery in Easton, and his workshops are in demand nationwide. His income, he said, is not comparable to what he used to make as an engineer, but he’s happier and can ‘make ends meet.’ He still considers himself a student, occasionally taking classes to improve his art and expanding his subjects to include more portraits and landscapes. “As I’ve become more and more into landscape, the plein air events have become more important roles in my paintings.” For the second year in a row, Huang participated at the Plein Air Easton this past year, taking home first place in the Quick Draw contest and winning automatic entry into the 2019 competition.

He credits his success and opportunities to the daily painting regime. “It’s a very good exercise,” he says. “Like any activity you want to be good at, you need to practice. It’s given me the discipline, and it is noticeable progress. I also learned internet and technology skills, and how to blog. I learned business, bookkeeping, and taxes. I learned entrepreneurship, and I also made some money.”

As he has in the past, Huang continues to be an innovator. He knows that with the rise of social media, besides the blog, his marketing has to include Facebook and Instagram as well. Art still takes up most of his time, but now he’s also interested in solar power, organic gardening, rainwater harvesting, etc., and uses his technological knowledge and background to pursue environmental sustainability. The irony is not lost on him. “So now after art became my career, my technology part became my hobby,” he says smiling.